THE ARMENIAN GENOCIDE:  A FACTSHEET

The Armenian Genocide was planned and carried out by the "Young Turk" government of the Ottoman Empire of Turkey in 1915 (with subsidiaries to 1922-23). One and a half million Armenians were killed, out of a total of two and a half million Armenians in the Ottoman Empire. Over half a million fled to Middle East, Europe, U.S. and Republic of Armenia.

Most Armenians in the United States, France,

Germany, Britain and Middle East are children or grandchildren of the survivors. Armenians around the world commemorate this great tragedy on April 24. On that day in 1915, the intelligentsia of the Armenians in Constantinople (present day Istanbul) were rounded up, deported and killed. Furthermore, the same day some 5000 Armenians of Constantinople were slaughtered.

The Armenian Genocide was masterminded by the Central Committee of the Young Turk Party (Committee for Union and Progress), which was dominated by Mehmed Talât Pasha, Ismail Enver Pasha, and Ahmed Djemal Pasha, the three most influential leaders of the regime in Turkey.

The Armenian Genocide was well planned and systematically carried out with the Young Turk government in command. Most of the orders and instructions to deport and kill came from the central and regional authorities. It started with beheading the Armenian population by exterminating the community leadership, the writers, the lawyers, the businessmen, the deputies. Simultaneously, the Armenians in the Turkish army were disarmed, placed into labor battalions, and eventually tortured to death or killed.

Finally, most part of the Armenian population was then subjected to forced deportations, marched off to concentration camps in the desert between Jerablus and Deir ez-Zor, where they would starve and thirst to death in the desert heat. On the march, often they would be denied food and water, and many were brutalized and killed by their "guards" or by "marauders." The authorities in Trebizond, on the Black Sea coast, did vary this routine: they loaded Armenians on barges and sank them out at sea. Those not deported were raped, robbed and killed by the military, the local Turkish and Kurdish tribes. Many reports however attest of the fact that many courageous Kurds and Turks, risked their lives by hiding and saving Armenians.

The Armenian Genocide was condemned at the time by representatives of the British, French, Russian, German, and Austrian governments - namely all the major Powers. The first three were foes of the Ottoman Empire, the latter two, allies of the Ottoman Empire. The United States, neutral towards the Ottoman Empire, also condemned the Armenian Genocide and was the chief spokesman on behalf of the Armenians. The American people, via local protestant missionaries, did the most to save the wretched remnants of the death marches, the orphaned children. Some Scandinavian missionaries played an outstanding role in saving countless Armenian lives and documented the genocide, some of that documentation available to this day.

Only one Turkish government, that of Damad Ferit Pasha, has ever recognized the Armenian genocide. In fact, that Turkish government held war crimes trials and condemned to death, in absence, the key architects of the Armenian genocide, namely 4 key leaders of the country. Ismail Enver Pasha, Ahmed Cemal Pasha, Mehmed Talât Bey among others were convicted by the Turkish court and condemned to death. The decision however was not enforced and the perpetrators were living in Germany and Georgia respectively.

Israel officially condemned the Armenian Genocide as Israeli Deputy Foreign Minister Yossi Beilin proclaimed on the floor of the Knesset (the Israeli legislature), on April 27, 1994, in answer to the claims of the Turkish Ambassador, that "It was not war. It was most certainly massacre and genocide, something the world must remember."

In 1997, the assembly of the Association of Genocide Scholars in its conference held in Montreal, in June, reaffirmed that the mass murder of Armenians in Turkey in 1915 is a case of genocide which conforms to the statutes of the United Nations Convention on the Prevention and Punishment of Genocide. It further condemned the denial of the Armenian Genocide by the Turkish government and its official and unofficial agents and supporters.

The Armenian genocide is similar to the Jewish holocaust in many respects. Both people adhere to an ancient religion. Both were religious minorities of their respective states. Both have a history of persecution. Both have new democracies. Both are largely surrounded by enemies. Both are talented and creative minorities who have been persecuted out of envy and obscurantism. There is one decisive difference though, Armenians, unlike Jews, were massacred on their own lands.

Scandinavian human rights activists and humanists were among the most dedicated advocates for the lives and rights of Armenian people. Among them were Norway’s Fridtjof Nansen, the Refugee Commissioner of League of Nations and a great humanist, Norwegian missionary Bodil Katharine Biørn and Danish missionaries Karen Jeppe and Maria Jacobsen who dedicated their lives to the cause of the Armenians being deported, orphaned, starved or massacred. All four humanists established and funded orphanages and food programs for the needy. Bodil Biørn, also played a pivotal role in documenting the massacres. She documented the events she witnessed, through her testimonial diary and photography, with images of the genocide followed by descriptive comments on the back, now availably in Norwegian Archives.

Norway’s outstanding political and social figure Fridtjof Nansen played a pivotal role in saving over 320.000 Armenian lives through the Nansen Passport alone. The Nansen passports granted identity and reception in major western countries, to those who were fleeing from the bloodbath in Turkey, deprived of citizenship and identity. After his visit to Soviet Armenia, Nansen authored a book Armenia and the Near East, where he expressed deep sympathies and respect toward Armenian people. Nansen was also an outspoken advocate for the rights of Armenians and their statehood throughout his lifetime and within League of Nations. His daughter Liv attested that Armenians were on his mind even on the eve of his tragic demise and the last word that he uttered was “Armenians”.

Fridtjof Nansen is considered a friend of the Armenian Nation. There are several schools, a park, streets, an orphanage and a hospital (built by Norwegian funding) bearing his name in Armenia. There is a foundation dedicated to Fridtjof Nansen, which has establishing a museum after him. The Nansen foundation in Armenia has publishes 20 books of Nansen and is planning to publish all  publications of Nansen in a 30 book volume. On April 20, 2011 a conference dedicated to the anniversary of Nansen was  held in Yerevan titled “The Armenian Genocide and the Scandinavian Response”. Guests and researchers from Norway, Sweden, Denmark and Russia attended the event. The exhibition with the same title has been travelling around Scandinavia and will land in Norway, in Holocaust Senteret to be exhibited during a high profile conference titled “The Armenian Genocide and the Politics of Denial” on March 6, 2015.

Memorial plaques dedicated to Fridtjof Nansen and Bodil Biørn have been erected with memorial festivities, at the “Memorial Wall” of the Tsisernakaberd Genocide Memorial Complex in capital Yerevan.

2011 was the year of 150th anniversary of Fridtjof Nansen. A monument to Nansen was erected on this occasion, in the center of capital Yerevan, with the participation of Norwegian and Armenian foreign ministers and Nansen's granddaughter. Series of official events were held in Armenia and Norway celebrating this anniversary. October 12, 2014 a museum dedicated to Nansen was opened by the Armenian president. The museum – chapel is located in the Nansen Park in Yerevan. 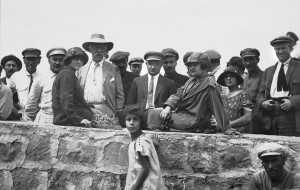